I do like paying taxes (as well as social security contributions). I know what I am – what all of us are – getting in return: education, healthcare, infrastructure, safety and security, stability. Paying tax is a very social act, as it enables our societies to provide these very foundations of modern civilizations. It is my conviction that all who profit should contribute. Unfortunately, leaders of many corporations do not share this point of view, as the #luxleaks revelations showed once again.

Always striving to maximize profit, they hire Pricewaterhousecoopers and the like to design tax evasion schemes (taking for granted that their shareholders are happy with these anti-social measures). Even though these might be legal (which might just as well not be the case), they do harm to our societies. Yet, there is a simple way to at least make management think twice before they again act against our common interest: Let’s oblige them to publish two figures in the most prominent of places: Their earnings in a country as well as the tax they are paying there. This is the #2figures4justice idea.

Let’s face it: PWC, KPMG, Deloitte, Earnest and Young and their smaller peers do have the means to hire the best brains (brains, not personalities) out there. New tax laws, initiatives etc. will not outsmart them. In fact they will be looking forward to these – so they can charge even more money for even more complex evasion schemes. A new European tax compliance legislation like Guy Verhofstedt is proposing one is necessary and I am not saying we should not try – but it will take ages until we’ll see improvements. 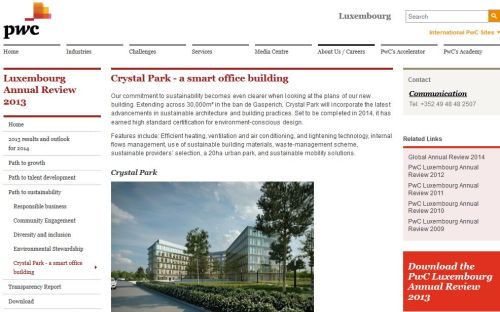 „Crystal Park“ – PWC in Luxembourg. With a lot of people in there who will fight tax fairness for profit.

There has to be another way. And in fact, #luxleaks just pointed us in the right direction: Transparency has to fix this for us. In the current debate about tax havens such as Luxemburg or the Netherlands (Switzerland is still the undisputed champion here, and currently probably quite happy that for once the others are in the limelight) few reports did receive more attention and caused more popular outrage then the ones containing figures about corporate earnings and tax paid.

As an example, Apple did not even pay any corporate tax in Germany in 2011 – on the contrary. According to “The Anstalt”, a popular political comedy show in German public TV ZDF, the company received a tax refund of 201.493 Euro. Yes, a refund. Starting to feel revolted? This is exactly what we need, and this is what #2figures4justice is based on.

What if all companies had to publish what they earn per year per country and the corporate tax they are paying in that country? Wouldn’t many of them feel deeply ashamed putting a five or six digit number next to a triple million or billion Euro figure?

#2figures4justice or short „#24“ for Germany taken from www.zeit.de. Not a very social ratio, not at all.

Transparency about these (and more) figures is part of the debate around country-by-country reporting and OECD’s tax system improvement plans (commissioned by G20) they do want to present until the end of 2015. PWC & Co hate CBCR as they hate any transparency that might ruin their sophisticated tax evasion architectures. OECD’s initiative is important, but it has powerful enemies who will try to dilute any effective measures. This means long battles – but we need a quick fix. Two figures, that is all.

#2figures4justice would have to be published in the most prominent of all places – this is paramount to the ideas’ success. Companies with a bad ratio otherwise might just publish it in a well hidden spot in their reports.

Turnover in Germany in 2013 according to meedia. Tax unknown to me. I’d love to know, though – wouldn’t you, too?

The “most prominent of all places” varies from company to company. In Google’s case this would have to be above the first search result, in Amazon’s case on the box or maybe on the invoice, in Starbucks’ case right on the paper cup. I bet communication departments, service staff and the management would soon get tired of the accusing looks of their customers and of having to explain again and again that their anti-social behavior is perfectly legal.

Starbucks did not pay any tax in the UK in 2012. Picture (c) CC-license Brian J. Matis (changed original file, to be used under same CC license)

Corporations wouldn’t really be able to cheat on #2figures4justice. Well, of course they would – we’d never know if the figures are perfectly accurate. But who cares? We’d be able to tell a lie if Amazon tried to publish earnings of „only“ a few millions in Germany. Even if “Amazon.de” would not make any money because in the world of corporate architectures “Amazon Money GER” would cash in – #2figures4justice would not be affected because in the eyes of you and me, Amazon is Amazon. If Amazon says they are earning zero – they are lying (even if they might not be in corporate terms). Corporations know that, figures will be roughly accurate.

The earnings per country / tax in same country ration would not tell us a lot about the tax rate of the specific company because we wouldn’t know their costs, investments etc. But this is rather good for our purpose – we don’t want to know the spending side. Because here is where tax evaders cheat. By paying gazillions to sister companies in tax havens for “brand or patent usage rights” they balance their earnings (without harming the corporation as a total at all) and pay low or no tax.

Fair Tax Mark – A great initiative in the UK which works a little different. Companies that are transparent are awarded a logo (via @basbrinkmann). Not sure if this is not too much work and responsibility for a single tax activist group. #2figures4justice would not require anyone to evaluate anything.

The beauty of #2figures4justice lies in its simplicity. Tax legislation does try to make evasion impossible, and companies might still end up with a happy zero (or refunds) in the end. #2figures4justice does not allow for information evasion. What do you think? Does this sound like a promising approach to you? If so, what’s next? Maybe someone can forward to @JunckerEU , @AlmuniaJoaquin @OECD or anyone else on our side 😉

tl;dr Make Starbucks publish local earnings and tax paid on their paper cups and they will stop stealing our money.

P.S. There are two books I can highly recommend (no Amazon link this time, for reasons 😉 if you want to read more on the topic of tax havens and where we stand today fighting these anti-social institutions (spoiler alert: at the very beginning, even after the automated tax information exchange agreement was signed this month):